Given the number of Eveleigh’s staff, timekeeping was a serious job. The accuracy of the timekeeping was reputedly so good that the locals set their pocket watches and kitchen clocks by it.
Media

The timekeeping instrument changed over the years. The bell of the Works Manager and Timekeeper's Office was rung only during the 1890s and 1900s.

“We used to live by whistles. Your first whistle would be 27 minutes past seven. That would be three minutes to get ready to start work. Then the next one would blurt out at 7.30. That was usually the time for me and me sister to leave home and go to school.”

The bell was replaced by steam whistles, which Richard Butcher recalls could be heard in Bronte in a westerly wind. Later, the passage of the day was marked by an electronic buzzer. 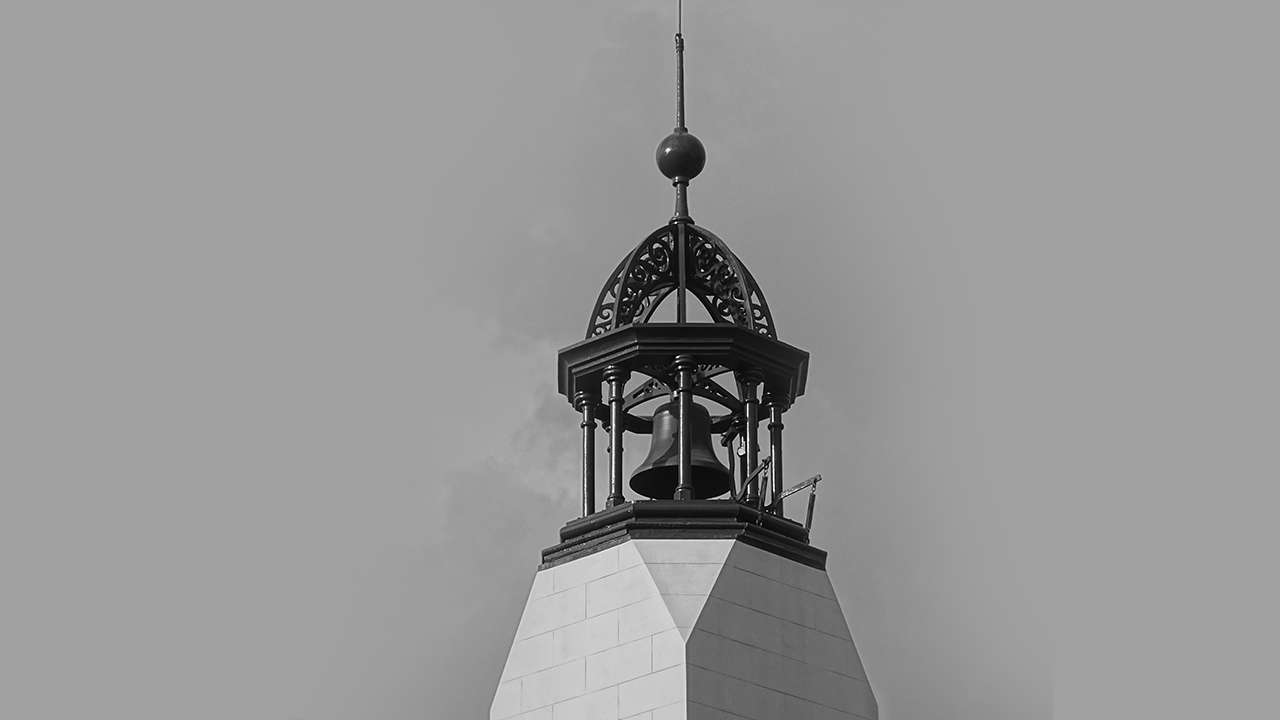 The Eveleigh time schedule influenced life for those who lived in the surrounding suburbs, and the families of workers.

“I liked the strict working hours, because it enabled me to run my household schedule. I knew what time father would be home, what time to get the tea ready and what time the boys had to be in for tea and to line up for your bath.”2 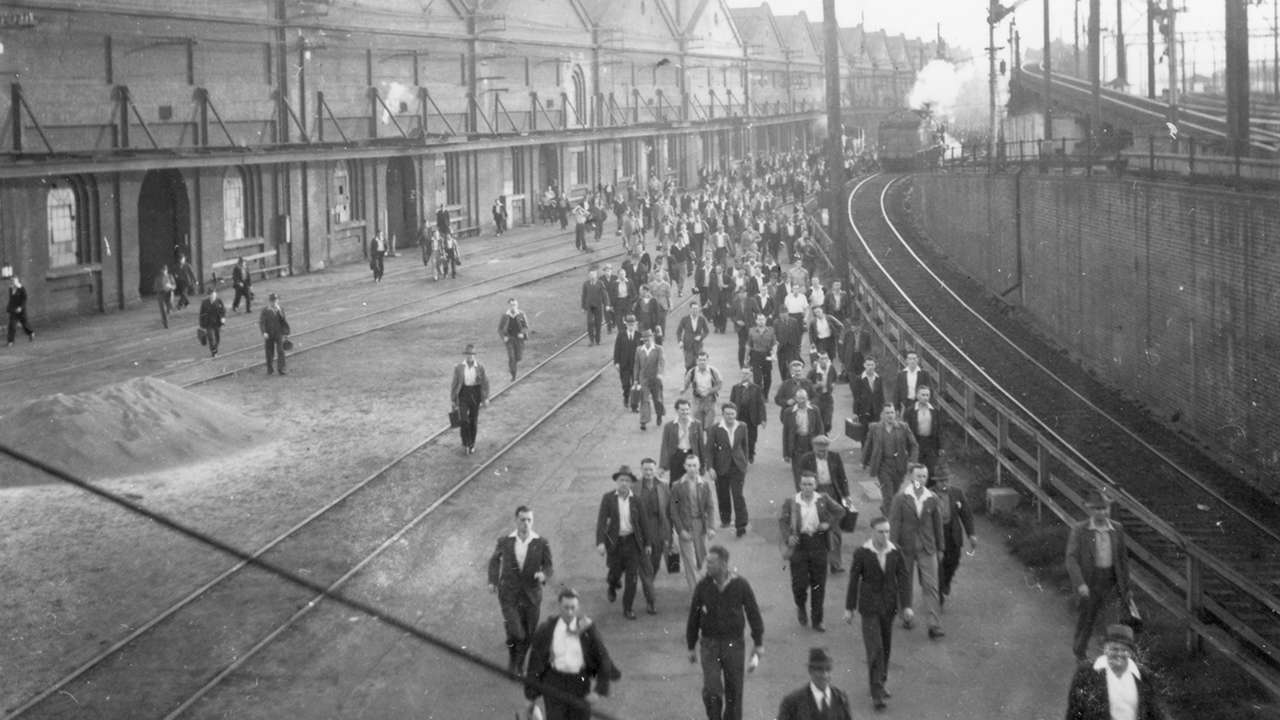 When Eveleigh still had a large staff, Allen Madden remembers:

“The workers lining up at the gate at the end of the day, waiting for the whistle and the gates to open.

The workers then charged up the hill ‘like ants’ to get to the pubs before 6 o’clock closing.

In later years when the workforce was reduced, the rigidity of the system eased. The gates remained opened all day.”3

The 1917 General Strike arose from the introduction of ‘Taylorism’, a move to cost individual jobs by timing them. The strike spread throughout the railway system and became the largest industrial dispute in Australia’s history. It engulfed the nation and lasted for six weeks. Among the strikers was Ben Chifley, a train driver and future prime minister. 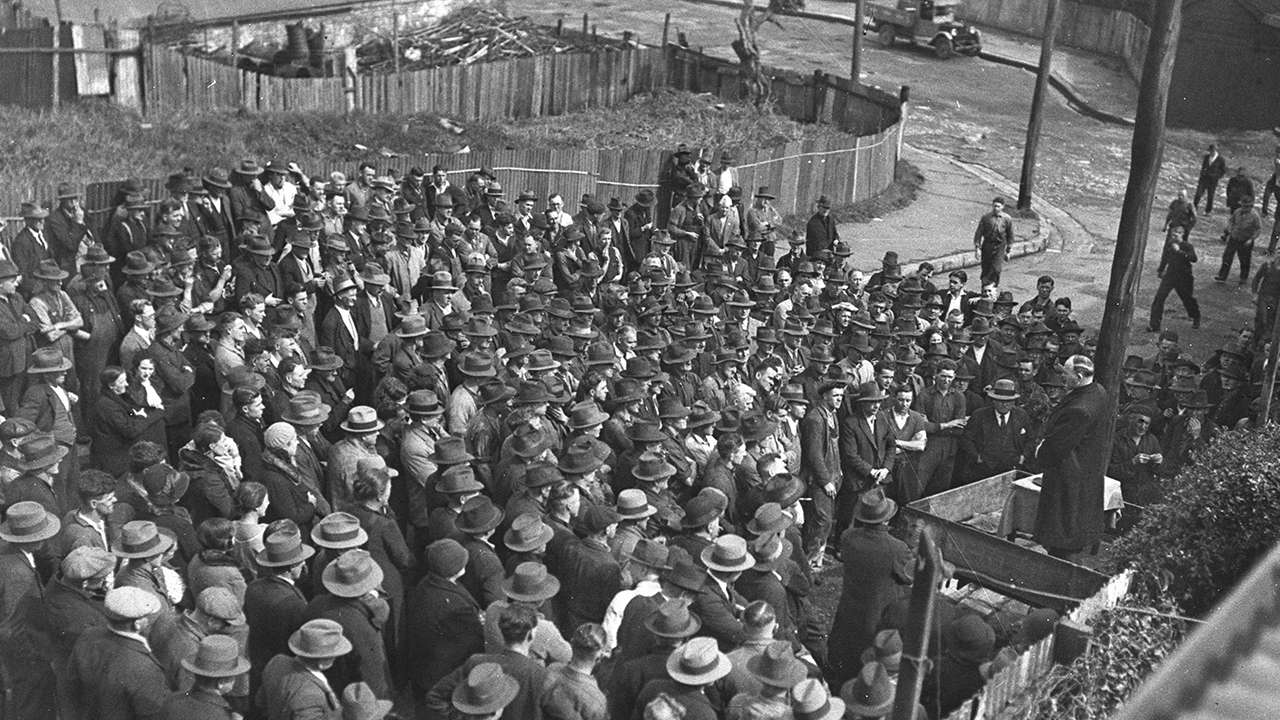 In 1932 the Lang government abolished the Taylor Card system, but replaced it with timesheets that were overseen by ‘Irregularity Clerks’. If time could not be accounted for, a ‘bung’ was issued and had to be responded to in writing. If a worker could not explain their actions, their pay would be docked.

If you got caught being away from the work location, you’d get a bung…if you got a bung you could lose 15 minutes of pay. If it was really bad you could be sent home and you’d lose whatever time” 4

Washing up early was not allowed, and workers caught washing up before the bell, using hidden buckets at their work station, would be reprimanded. Other misdemeanours were often associated with ‘wasting time’ and, if caught, workers received a bung.

By the 1950s, “workers were controlled by a ’token system’ locked up in a small wooden cabinet in each section, with the sub-foreman usually looking after all the boards. Three minutes before the warning whistle was due to blow, the boards were opened and workers could collect their numbered tokens held until lunch.

At 12 noon the whistle blew and workers washed up; then three minutes later the board was opened and tokens were hung on the correct position.

Forty minutes later and the three minute whistle blew and tokens were collected to be held until knock off time: the end of another day at Eveleigh.”

Works engineers, cost clerks, time estimators, clerical assistants and planners worked in the office keeping the workshops running. Timesheets were filled in to account for the eight hour day, and these were given to the timekeeping and costing section, in the Works Manager’s Office.

“It was so strict at one stage, especially when I first started here [1976] you used to have to ask the foreman if they’d give you permission to go and use the toilet.”

“Timekeepers were remembered by John Bruce as tough people. Applications for holiday pay or special payments were made through the Timekeeper’s Office, “through a big window which had like a counter-sill on it. That was as close as you got.”

Those who worked in this section were not seen as part of the workshops’ community. The task of enforcing the time system probably made friendships difficult, and the two groups did not mix.

Time was allocated for jobs, but there was some flexibility. John Bruce recalled,

“The work that was given to you – a time would have been worked out between the foreman and other tradesmen about how much time it would be reasonable to expect the job to be done in.”7