The Eveleigh Railway Workshops were a source of employment for Aboriginal people, who were employed in the foundry, boiler room, workshops and later the goods yard. Aboriginal people travelling into Redfern from the country had family connections here, where rental housing was affordable.
Media

Aboriginal workers were respected at Eveleigh as hard working and reliable, but opportunities for advancement were limited.

Even though the work was often referred to as unskilled, former worker Hal Alexander observed:

“They weren’t unskilled. They were highly skilled. People specialised at what they did – they learnt how to bend their backs, which tools to use and how to carry out the work to make it easier. The work was really hard, but becoming an expert and ‘knowing what you were doing’ made it so much easier.” 1

“Most of my work here was on kegs. That’s what I specialised in more or less. Didn’t like drinkin' 'em, although you couldn’t drink the bloody things anyway, but handling them was good. Not only working here, I used to get sent down to Darling Harbour [Goods Yard], because they used to do the same things.

There were specialised black fellas where we worked, some worked with salt, paprika, prunes, and they were the jobs where these fellas knew what they were doing.

Like, for argument’s sake, if you were to come in now and start unloading salt, you wouldn’t know how to pick 'em up or how to bend your back, it’d be really hard. But these were jobs that we specialised in more or less. Unloading and loading the carriages.”2

“The Maltese, Greeks and Italians and Kooris who lived in the same area did so without incident and that…it was just the white fellas that caused all the problems.”

The Madden family lived in Cornwallis Street next door to the Eveleigh Workshops. Community was reinforced by the rhythm of the working week, which was regulated by the whistles of the Eveleigh workshops, and of course by pay day.

Allen Madden remembers that every Friday there was a fruit stall opposite the Eveleigh gates, and his father, along with many other men, would bring home a big bag of fruit for the children. Men would also line up to visit the pubs before they closed at six o’clock.

Being employed gave a certain amount of autonomy – while many told their kids “to go and play” when the police pulled up, Allen Madden says his father was never worried; he was ‘exempted’ because he worked.

“Everything that you ever wanted was right here. You were happy, you were content – sure there were hard times and there were good times – but as kids you really didn’t understand the hard times that your parents went through.”2 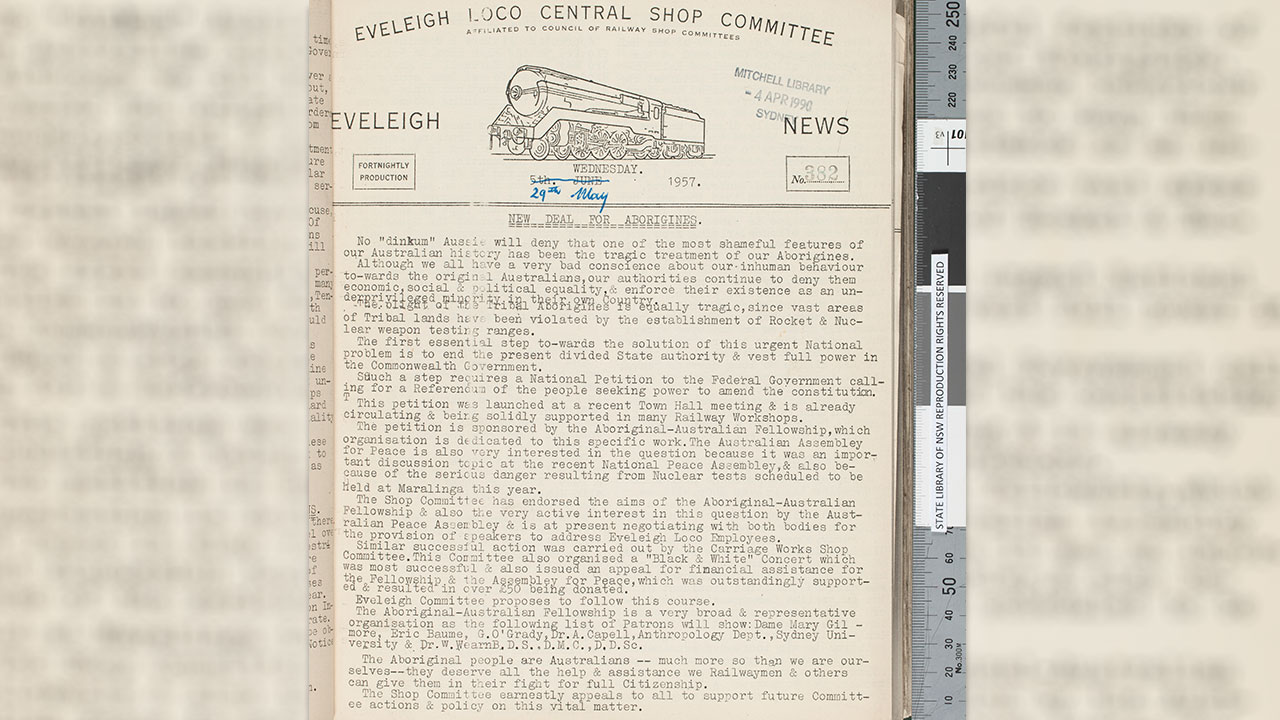 Eveleigh was a place of political activism and union activity. Practically everyone was a member of the union, as it was impossible to be employed at Eveleigh otherwise.

Aboriginal people experienced discrimination at Eveleigh, as elsewhere in society. There was some disenchantment with the unions, as Aboriginal people were maybe 100 of about 3,000 workers, and it was difficult for them to have a strong voice to push issues. However, the unions provided some comfort through shared experiences, as both were fighting for political change and an improvement in conditions.

During the Second World War Aboriginal people served with military forces, and were employed in essential industries at equal pay. When the war ended, many Aboriginal people refused to return to the inequalities of the past. As Aboriginal people formed their own networks and groups to campaign for improved conditions, some unions supported them, including those at Eveleigh.

The Eveleigh News published by the Loco Shop Committee opposed weapons testing at Maralinga, and spoke out against discrimination in the courts and wider society during the 1950s and 1960s. Bert Groves, a returned soldier who became a prominent Aboriginal activist, spoke at Eveleigh one lunch hour. 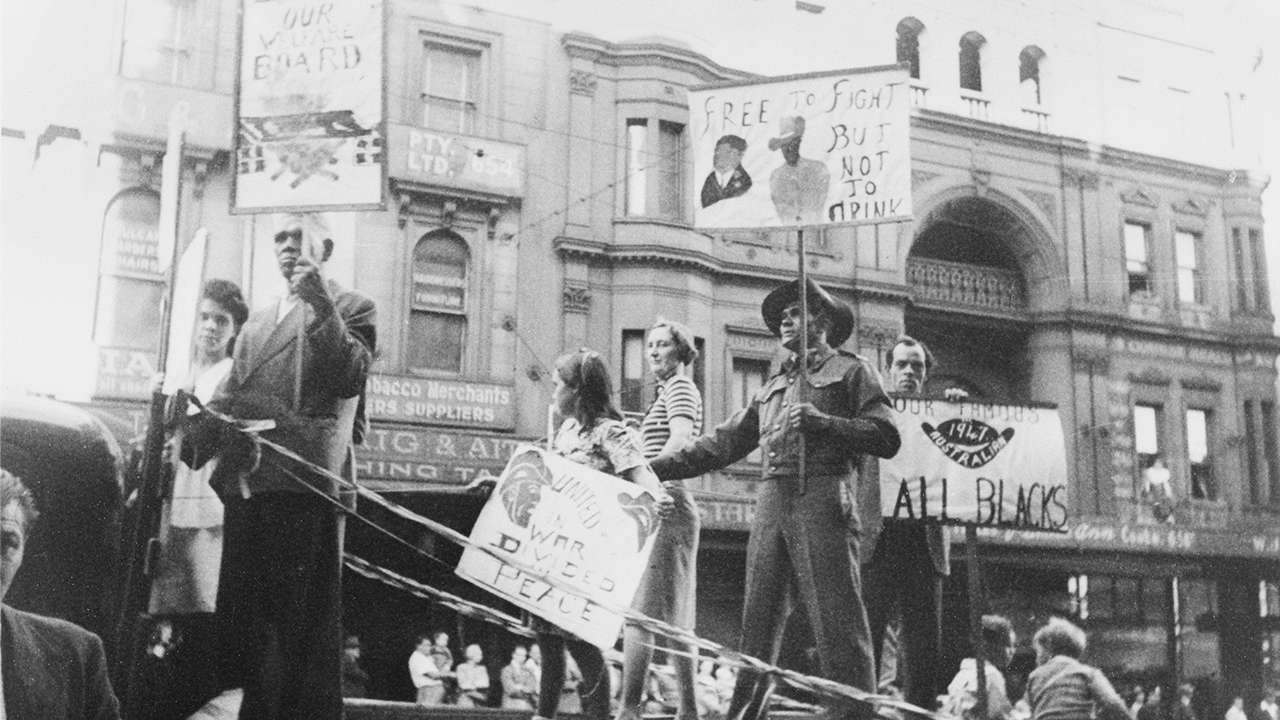 In the 1960s, the character of Redfern began to change. Many industries, previously large employers of working class families, closed down and moved to outlying suburbs. There was also a general downturn in the railways as Australia fell in love with road travel and cars. Eveleigh became a ghost town, a series of buildings that merely echoed with the industry of the past.

By the 1980s, where thousands of people had worked, only 50 to 60 remained. At this time, Aboriginal organisations, such as the Lands Council and the Aboriginal Medical Service, became the largest employers of Aboriginal people in the Redfern area.

To this day, the Gadigal clan remembers this place for its traditional connection to country and for the pathways that connected clan members. They also remember Eveleigh as a place of community, of shared hardship and different cultures coming together to ease the burdens of others.

“Aboriginal culture is based around sharing and caring – and that’s still here with Aboriginal people as it’s always been…one thing we do well is survive.”

Today, Aboriginal connections to Eveleigh remain, interwoven into the fabric of the place. At the Carriageworks Arts Centre, Aboriginal dance and theatre companies continue the tradition of working at Eveleigh and at Yaama Dhiyaan young Aboriginal people are trained in the hospitality and construction trades.