His ability to avoid major scandals earned him the nickname ‘Old Smoothie’.
Media

J.J. Cahill was born into the tight-knit railway community of Redfern on 21 January 1891, the son of an Irish labourer. In 1907 he was apprenticed as a fitter at the Eveleigh Workshops. He went on to become the Premier of New South Wales in 1952.

In 1917, as a union delegate, Cahill was dismissed from his job as a fitter at Eveleigh for his part in the divisive General Strike and his personal file was marked 'agitator'. 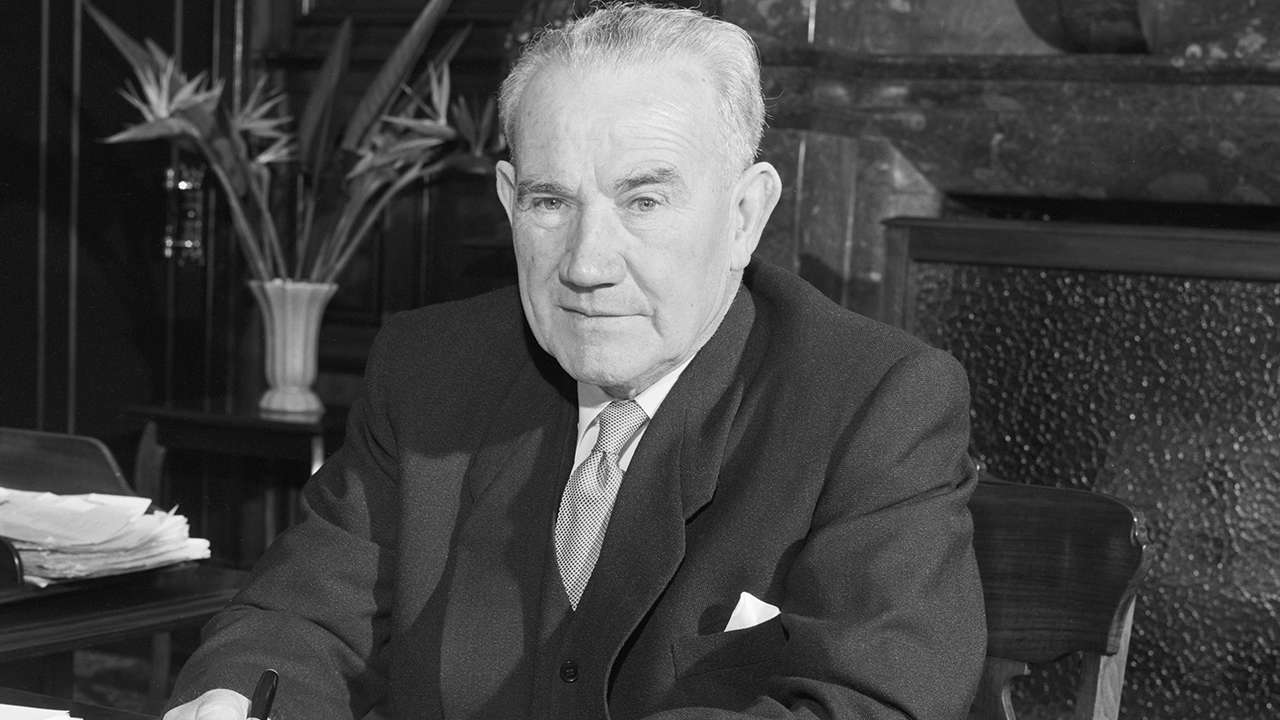 John Cahill was finally re-employed as a fitter at the Randwick Tramway Workshops in 1922. He gained his political education as a delegate of the Amalgamated Society of Engineers. He saw a Parliamentary position as a natural outcome of his union activities. After standing, unsuccessfully, as a Labor Party candidate in 1917, he was elected to the Legislative Assembly for St George in 1925. He spoke frequently on railways and constituency matters.

His early career was dogged by accusations from within his party of his having accepted bribes. He was alleged to have crossed the floor in order to bring down J.T. Lang’s Labor government.

The allegations were eventually discredited and he retained his seat in the 1930 State election. But Lang’s government was defeated in 1932, and Cahill lost his seat.

In 1935 he was re-elected in the seat of Arncliffe, although Labor remained in opposition until the elections of 1941. At that time Cahill was made Secretary for Public Works and later Minister for Local Government. By 1951 he had established the State Dockyard (Newcastle), the State Brickworks and supervised the establishment of the Electricity Authority and the Cumberland County Council.

Cahill won the leadership ballot in 1952 when James McGirr, Premier since 1947, resigned. He became Premier on 2 April and implemented a disciplined and aggressive administration.

Of Cahill it was said:

“No Premier was ever a harder worker, none was ever called on to bear fools more gladly… A sound family man, in his private moments he was a friendly soul, even when sorely tried. His one real, bred-in-the-bones hate: daily newspapers.”

In 1957, despite significant internal opposition, Cahill committed the NSW Government to the construction of the Sydney Opera House, his most visible legacy.

In March 1959, Cahill won office again by a narrow margin and, in June, became the longest continuously-serving NSW premier. On 21 October, Cahill had a heart attack in the Legislative Assembly while defending his government against a no-confidence motion. J.J. Cahill died on 22 October 1959 and was accorded a state funeral.

Along Parallel Lines: A History of the Railways of New South Wales, Melbourne University Press pp. 436