In the short time between 1855 and 1906, there were, in Redfern, a total of four railway stations, and two separate railway workshops.
Media

On 3 July 1850, 10,000 people gathered in Redfern to watch Mrs Keith Stewart, the daughter of Sir Charles Fitzroy, turn the first sod near the end of today’s platforms 3 and 4 at Central.

The first railway line in Sydney opened in 1855, linking Sydney and Parramatta Junction. By the time of the opening ceremony, the private Sydney Railway Company had collapsed and the New South Wales Government owned the railway.

Sydney’s first railway terminus opened on the site of Cleveland Paddock in 1855.

Also known as Government Paddock, this station was located between Devonshire and Cleveland Streets, on land now occupied by Prince Alfred Park and the current railway. Known as Redfern Station, this first terminus was not a grand building. It was a corrugated iron tin shed and long wooden platform. In 1856 additional sheds and railway yards were added. It continued to expand and by the 1870s the Redfern Railway Yards included carriage and engine sheds, as well as a goods shed. 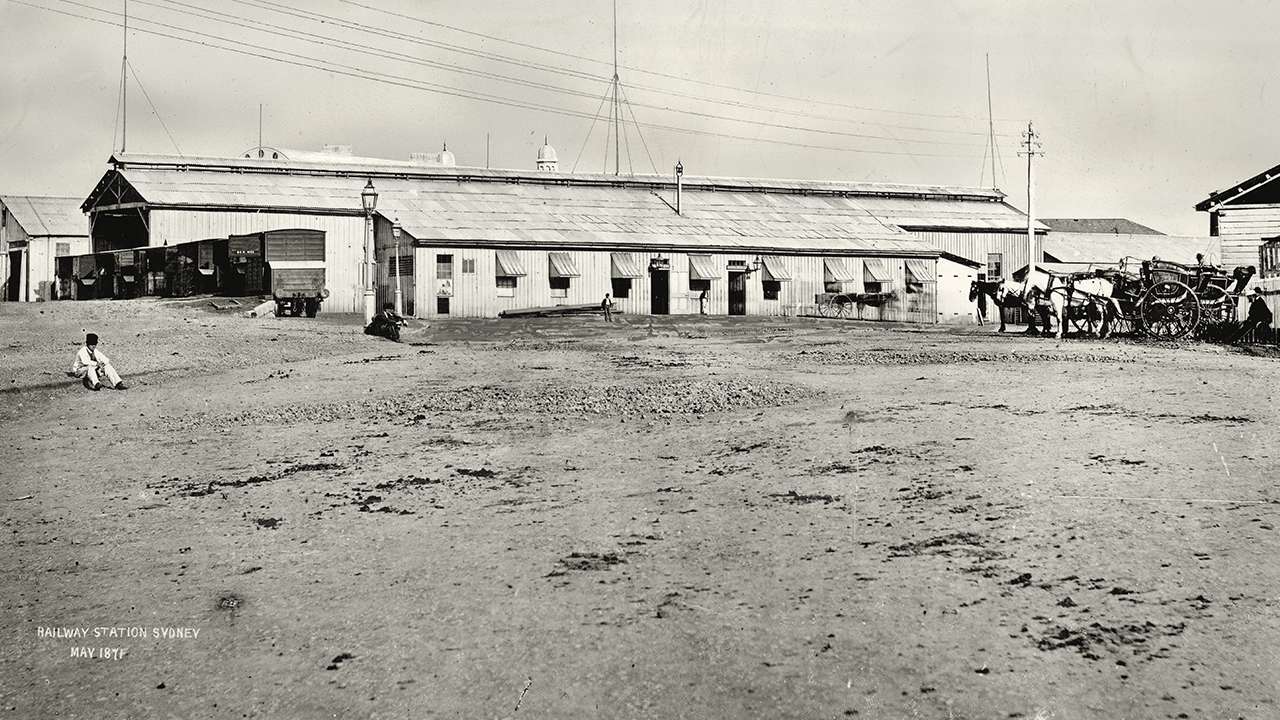 Railways Chief Engineer John Whitton designed a new railway terminus which opened in 1874 on the site of the first Redfern Station. These impressive brick and stone station buildings were built to allow future expansion. Nevertheless, they were soon obscured behind the growing spread of platforms and rail traffic.

Passenger and goods traffic continued to grow rapidly and soon outstripped the capacity of the station and associated workshops to expand. In 1878 the Chisolm Estate was resumed for construction of the Eveleigh Railway Workshops. Designed by NSW Government Railways Chief Engineer, George Cowdery, the principal components of the second Redfern workshops were built at Eveleigh between 1882 and 1887. 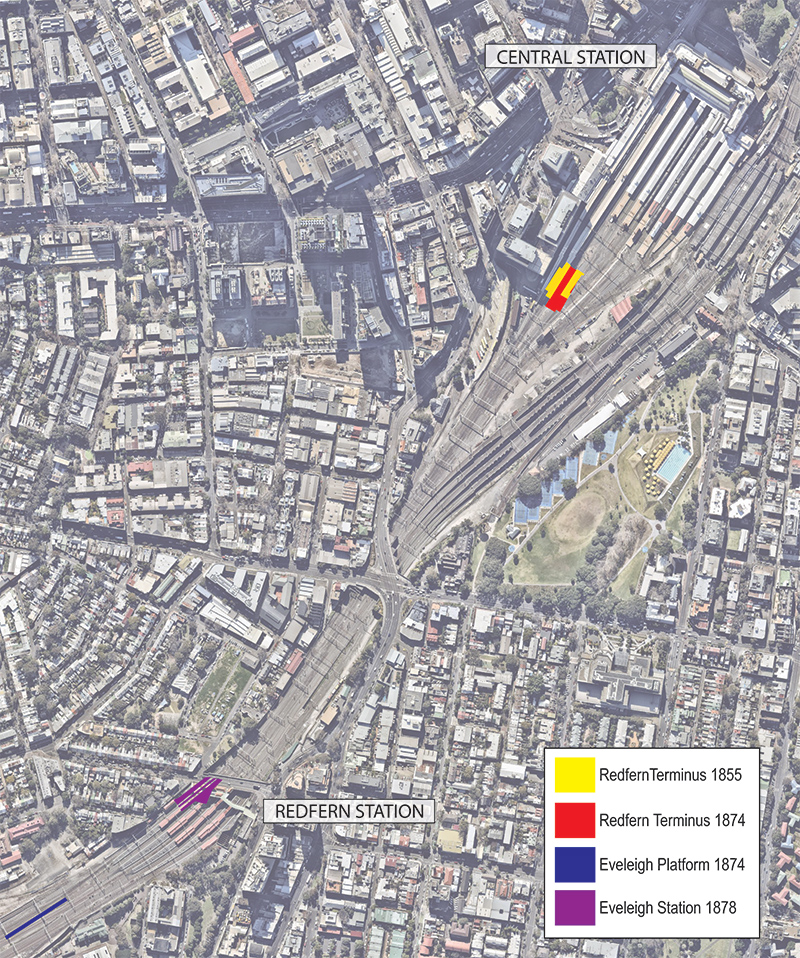 There were many calls from the public for a platform, where the rapidly growing populations of Darlington, Alexandria, Waterloo and Redfern, could better access the railway line. In 1878 the first Eveleigh Station was opened approximately 1.3 km west of the Sydney terminus and in the approximate location of the current Illawarra train dive (south of the current Redfern Station). Described as Eveleigh Platform, this third Redfern Station may only ever have been an interim solution. Unfortunately no confirmed image of this station has been found and its location has been swallowed in the multiplication of railway lines along this corridor.

In 1885 the fourth Redfern station – a new Eveleigh Station - was constructed north east of the Eveleigh Platform. It was re-named Redfern on 21 October, 1906 after the grand opening of Central Station and the closure of the old Redfern Station. This is the Redfern Station that is still operational today.

On 11 December 1900, Parliament approved the construction of a new Sydney terminal station on the north side of Devonshire Street at an estimated cost of ₤561,000 (approximately $78,540,000 contemporary cost).Building the grand new terminus required resumption of many existing civic buildings including the Benevolent Asylum, Devonshire Street Cemetery, Christ Church Parsonage, Police Barracks, Sydney Female Refuge, Convent of the Good Samaritan and the South Sydney Morgue. 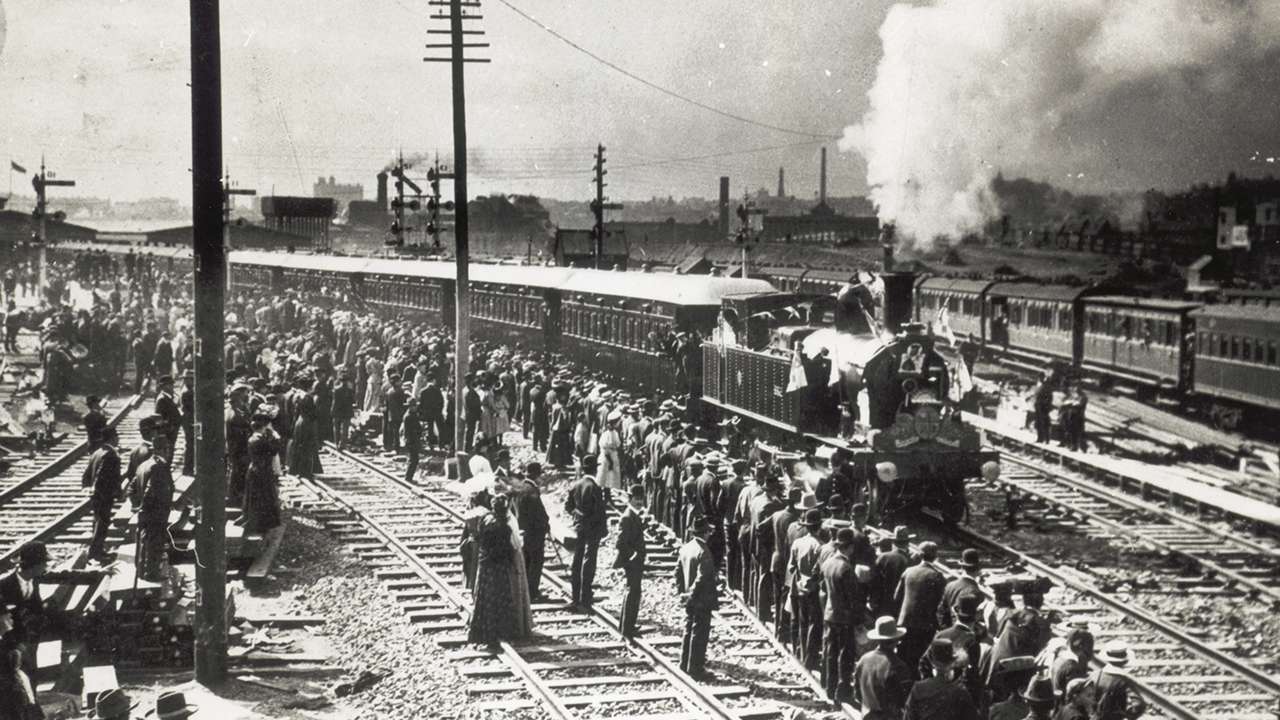